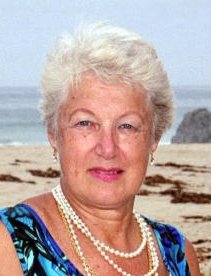 Erika Ingrid Thiringer died at her home in Sarasota, Florida, on July 16, 2020. Erika is most remembered  by her many friends and family as a person of boundless energy, enthusiasm, and positivity and was dearly loved.  She rarely had a negative word to say about anyone, and maintained an upbeat outlook even while fighting an aggressive form of melanoma that eventually took her life.

Erika was born to Erich and Julianna Forfota in the city of Szeged, Hungary, in 1935 as the eldest of four children.  During the turbulent years of World War II, Erika helped her mother and refugee family through many hardships, often without her father who as a doctor frequently served in hospitals during the war. As a result, she experienced near constant migration, hunger, and sacrifice until eventual family reunification and emigration, first to India and then to America. Her family settled in California, where Erika earned a Bachelor’s degree in French at the University of California, Santa Barbara.  Shortly thereafter, she met her future husband Thomas Thiringer through mutual friends within the California Hungarian community. They married in 1960 and settled in the San Francisco bay area.  After Thomas took a job at NASA Headquarters in Washington, D.C., they moved to northern Virginia where Erika dedicated herself to raising their three children. Fluent in four languages, she occasionally worked as a translator, a substitute French and German teacher, and a volunteer interpreter. In 2001, she and Thomas moved to Sarasota, a few years after Thomas’ retirement from the civil service.

Erika’s exceptional desire to support her community found many creative outlets.  She was gifted with a beautiful singing voice and sang frequently in her church choir and as a cantor.  She was most passionate about volunteering with the Girl Scout program. She first led her girls’ troop in Virginia, but stayed involved long after they had moved on from Scouting. Over 30 years, she held many positions such as Trainer, Service Unit Leader and Cookie Chairman, and even participated in several international programs overseas. While in Sarasota, she engaged with the Girl Scouts of Gulfcoast Florida and continued volunteering well into her 80s.  Erika also tutored young Sarasota area children with reading difficulties through the HOSTS program.  An avid gardener, she volunteered with the Marie Selby Botanical Gardens.  She was also an active member of the Kossuth Club, a club for Hungarian Americans in Sarasota.  However, her grandchildren were her pride and joy.  She spent countless hours with them decorating Christmas cookies, teaching them Hungarian cooking and baking, and playing at Siesta beach when they visited.

Erika is survived by her husband of 59 years, Thomas Thiringer, daughters Andrea Billewicz (Michael) and Christina Bonorden, son Peter Thiringer (Kathleen), and her six grandchildren, Melissa, Leslie, Steve, Natalie, Kara and Joe, all of whom will miss her dearly. She also leaves behind her sister Karin Poklen and brother Gerbert Forfota and her dear nieces and nephew. She was preceded in death by her sister Heinke and son-in-law David.

Due to current restrictions, we are unable to gather with family and friends to celebrate Erika’s life. Inurnment at Arlington National Cemetery will occur at a future date. In lieu of flowers, donations may be made to the Girl Scouts of America.

To send flowers to the family or plant a tree in memory of Erika Thiringer, please visit Tribute Store

Share Your Memory of
Erika
Upload Your Memory View All Memories
Be the first to upload a memory!
Share A Memory
Send Flowers