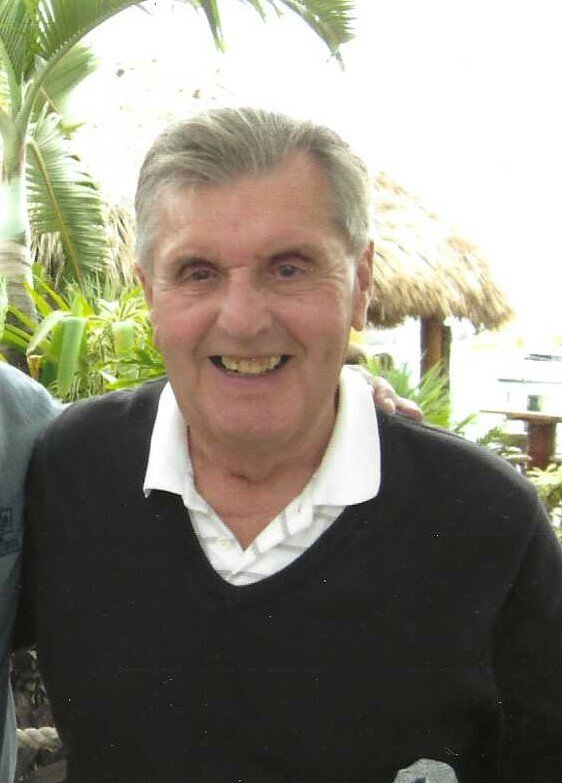 His mission in life was to make people smile.

Larry Gosselin (87), went to be with his Lord at his home in Venice, Florida just past midnight on September 22, 2021, with his loving wife and sons nearby. After a courageous 3 ½ months battle with liver cancer, he longingly joined loved ones who had passed before him.

Larry was born May 10, 1934, to his parents, Napoleon and Marion (Trahan) Gosselin in Newport, Vermont.

Larry was preceded in death by his parents, one infant brother, Eugene, two sisters, Louise Bushnell, Frances Alexander, and his son, Steven Gosselin.

Larry graduated from Sacred Heart High School in Newport, VT in 1953, where he was captain of the basketball team, and played drums in the school band.

He was PFC Korea War Veteran, serving in Jimmiachi, Japan on Ocado until his Honorary Discharge Christmas Eve 1955. He often told the story of crossing the Atlantic on-board ship during a hurricane. He chose to go topside, standing, leaning against the smokestack during the storm!

He moved to Barre, VT where he and his first wife raised four wonderful sons. He worked in the granite sheds as a polisher, Montgomery Ward in the shoe department, sales at the Mekkelsen RV dealers, and a leader at Weight Watchers meetings. His full-time job was an insurance adjuster throughout the state of Vermont for All State, American Fidelity, UAC-Underwriting Adjustment Co, and Cigna.

Larry met his second wife, Gerry, while working at a Weight Watchers class in Rutland, VT. When they married on August 3, 1984, Larry moved to Rutland.

Larry earned a Paralegal Degree from Vermont Law School and a BS in business from the College of St. Joseph in 1993 in Rutland, VT. He used those skills during his time working with Ryan, Smith, Carbine law firm in Rutland.

They spent summer weekends and vacations at their camp at Sunset Cove in Grand Isle, VT, where Larry was the Park Manager for a number of years, fishing and boating on Lake Champlain. There were also a few trips to Lake Ontario for Salmon fishing, where Gerry caught the largest!

Larry was a true outdoorsman even in his youth with Pete Handy and Gary Carter, the 3 Musketeers of Newport! He loved rabbit hunting with his beagles, deer hunting in November when he bagged an 8-point buck. Skiing, snow-mobile trips in the winter months, fishing and boating in the warmer months. He was quite proud when he finally owned a Grady White fishing boat when he moved to Florida.

After retirement, when he and Gerry moved to Venice, Florida in 2000, he worked at the Jacaranda Golf Course in the cart barn. Later, he trained as a bridge-tender on the Intracoastal Waterway, manning the Manasota Bridge.

Larry leaves a legacy of volunteerism. He was a devout Catholic who was an Altar Server at St. Mary’s in Newport, VT, St. Patrick’s in Wallingford, VT, and Immaculate Heart of Mary in Rutland, VT. He served on the Parish Council and as a lector at St. Patrick’s. At Epiphany Cathedral Parish in Venice, FL, he served on the Parish Council, many committees, and lead usher at the 4 o’clock Mass for many years, and a Eucharistic Minister at the Hospital.

He established and facilitated a Chapter of the Compassionate Friends in Venice, for parents who have lost children of any age.

He was a member of many organizations including: Honorary Life Member of the Knights of Columbus Bishop Brady Council in Barre, VT where he helped build the Council House. The Barre Elks, the Barre American Legion Post 10 for 42 consecutive years. He trained as a Heart Saver SPC AED with American Heart Association. He was a volunteer for more than 10 years at Venice Regional Hospital on the Lifeline team, as a patient advocate and transporter where he put smiles on many faces! He also trained as a Hospice Volunteer, until Covid shut everything down.

A funeral Mass will be celebrated at Epiphany Cathedral in Venice at 10AM on Tuesday, October 12, 2021.

A second funeral Mass will be celebrated in Randolph, VT at 12 Noon at Our Lady of the Angels Catholic Church on Thursday, October 21, 2021.  Followed by Procession to the Vermont Veterans Cemetery for a 1 PM committal service with Military Honors.

In lieu of flowers, donations may be made to the American Heart Association or Tidewell Hospice of Venice, FL.

To send flowers to the family or plant a tree in memory of Larry Gosselin, please visit Tribute Store
Tuesday
12
October

Share Your Memory of
Larry
Upload Your Memory View All Memories
Be the first to upload a memory!
Share A Memory
Send Flowers