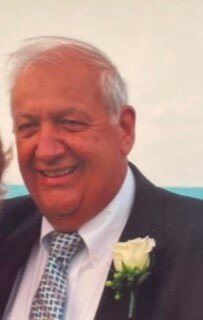 Anthony Valentino was born in Cleveland, Ohio to Anthony and Mary (Lemmo) in 1942 and was currently living in Sarasota, Florida. He reconnected with his college sweetheart, Marianne Erdelyi later in life and they were married for 33 years.

His early years were spent in Collinwood, Ohio, graduated from Saint Joe’s High School and received his bachelor’s degree from Ohio University. Anthony taught school for the Cleveland public school system and received the Martha Jennings award for outstanding teaching. He spent his later years working in the landscaping industry and helped manage his wife’s training and consulting business, Erdelyi & Associates.

He enjoyed playing bocce and his time on the board for Golf Point Association.  Rumor has it he is still looking out for the grounds at Golf Pointe.  Anthony loved traveling the world with his wife and special trips with the grandchildren. From his car, with the windows rolled up he often shouted out driving hints to other drivers.  “Read the signs” was his favorite hint. He was easy and fun to be with, loved by many and will be greatly missed.

Services will be held in the chapel at St. Thomas More Church, 2506 Gulf Gate Drive, Sarasota on Friday, December 9th at 9:30 AM.

Contributions in Anthony’s memory would be gratefully received by Catholic Charities at the Diocese of Venice, 1000 Pinebrook Rd.,  Venice, Florida 34285

To send flowers to the family or plant a tree in memory of Anthony Valentino, please visit Tribute Store
Friday
9
December

Share Your Memory of
Anthony
Upload Your Memory View All Memories
Be the first to upload a memory!
Share A Memory
Send Flowers