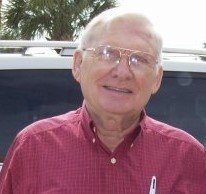 Edward was born October 24th, 1934 in Needham, MA to Reginald and Elizabeth (Coburn) Meyer. Edward was raised in Topsfield, ME and worked in his father’s logging and hunting camp until the age of seventeen.  He enlisted in the United States Navy in 1951 and was assigned to the U.S.S. Worcester (CL-144).  He came to Sarasota, after the Navy in 1954.

Edward started his career in masonry, where he worked building homes and commercial structures all over Southwest Florida.  He was hired to work at Cape Canaveral as a mason during the construction of Launch Complex 3, which was completed in 1959.

Edward married his wife, Mary (Dunigan) in Sarasota, July 2nd, 1965 at the courthouse, then again at Incarnation Catholic Church. Edward and Mary quickly established a beautiful relationship that would last their entire time together.  They were partners in life and in business, having established five retail clothing stores in Sarasota, St. Armands and Siesta Key.  They had a wonderfully successful career and it provided the freedom to travel and enjoy the best that life had to offer.   They regularly left each summer when school let out and didn’t return until the week before school began again in the fall.  Edward loved his family dearly, had an outgoing personality and thoroughly enjoyed traveling and seeing the United States while camping along the way.  He was a member of the Elks Lodge and avid golfer.  He will be missed by all that had the pleasure of knowing him.

Services for Edward will be held at Incarnation Catholic Church in Sarasota (2929 Bee Ridge Road), Friday, July 9th at 11:00 am, after the service, there will be a burial at Sarasota National Cemetery at 1:00pm.

To send flowers to the family or plant a tree in memory of Edward Meyer Sr., please visit Tribute Store
Friday
9
July

Share Your Memory of
Edward
Upload Your Memory View All Memories
Be the first to upload a memory!
Share A Memory
Send Flowers